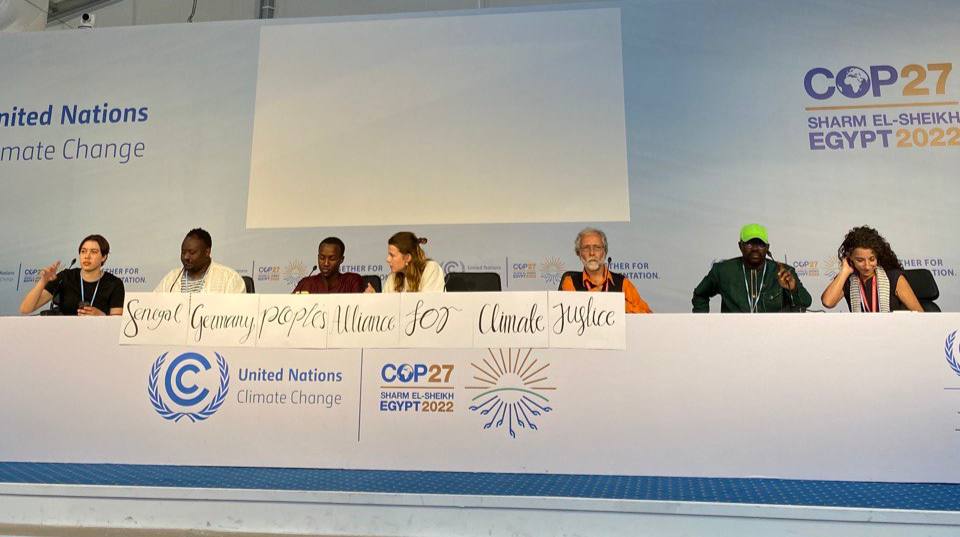 The ‘Senegal-Germany People’s Alliance for Climate Justice’ will be officially launched at COP27 as a clear rejection of the proposed gas deal by civil society from both countries. This alliance is a pledge to fight for renewable and just pathways out of the accumulating climate and energy crises and to challenge the proposed gas deal at every step.

Senegal and Mauritania are planning a floating liquified natural gas (LNG) terminal called “Tortue” on the maritime border between the two countries. If all of the gas in the field were to be extracted, it would be equivalent to emitting 2.2 billion tonnes of CO2 — almost twice the current annual energy emissions of the entire African continent. The German Chancellor has pledged to support the dangerous project with investments and technical development assistance  for power plant infrastructure. The joint project is one of at least 14 new fossil gas deals that have been made before or during COP27, despite almost every head of state worldwide speaking of the urgent need for climate action.

As citizens, climate and social movements from Sénégal and Germany, we firmly reject our governments’ proposed fossil fuel gas deal.

We are proud to launch the ‘Senegal-Germany People’s Alliance for Climate Justice’. If our governments are not willing to introduce the end of the fossil fuel era, then it will be the people who lead the way.

Together we are demanding a just and solely renewable partnership between our countries. Energy partnerships need to serve people and their livelihoods, not fossil fuel profits. They must be developed in cooperation with stakeholders on a national as well as local level, rely on the most precise science available, and be grounded in the protection of human rights and biodiversity.

Our governments are trying to sell this fossil gas deal as a form of crisis prevention. The truth is the opposite: This deal will not solve crises, it will create new ones.

The science is clear: Any new gas project worldwide threatens our chances to keep global heating to less than 1,5 degrees. Germany was one of many countries to sign the COP26 Glasgow Statement on public finance, committing to end public support for international fossil fuel projects by the end of 2022. The proposed gas deal with Senegal would violate this agreement and endanger Germany’s climate legacy.

Gas extraction threatens the livelihoods of the people of Senegal, where 1 in 6 people — especially women and girls — work directly in the fishing sector. Sixty percent of Senegalese jobs are located in the areas where the fossil gas is to be extracted. While 600 million people live in energy poverty across the African continent, most of the Senegalse gas from this project is set to be exported to Europe while only few in Africa would benefit — making the idea of “development” through fossil fuels a blatant myth.

On the other hand, the expansion of renewables and energy efficiency in line with the 1.5°C pathway would create many more jobs per unit of energy. It would also protect the livelihoods of the Senegalese people and protect the climate from deadly warming. This is the path the people demand. We do not need nor want new fossil gas, and Germany should not be spending public money on such a reckless disaster.

We the people demand:

The proposed agreement between Germany and Senegal has not been finalized. No new fossil gas has been extracted — and we plan to keep it that way. Senegalese and German civil society will oppose the financing, insuring and technical implementation of this planned project at every stage. Our fight has only just begun.

Cheikh Fadel Wade, African environmentalist and fisherman from Senegal. President of the environmental association Solidarité Ci Sutoura based in Senegal

Yero Sarr,  Fridays for Future Senegal. Yero is a founder of „Act on Sahel“, member of „Young Afro Climate Warriors“ and vice-president of the Jeune Chambre Internationale Universitaire Dakar Espoirs.